From Marlborough to Carter: In Search of a Maritime Army 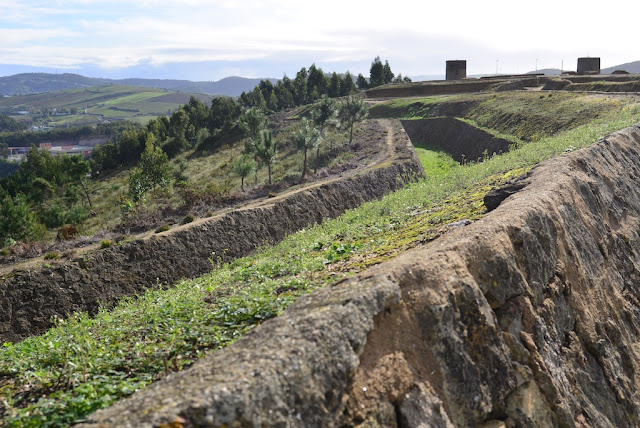 "It can reasonably be argued that had the Lines never been built, or had they been broken by the French army under Marshal Masséna in the autumn of 1810, the British would have had to evacuate the Iberian peninsula. This would have left the Portuguese and Spanish to their fate; Napoleon’s grasp over Europe would have been complete, his possession of Lisbon and capture of the Portuguese fleet could have shifted the balance of maritime power towards France; Britain could eventually have again been threatened with invasion."
-Col. (Ret'd) G.W.A. Napier, Royal Engineers, 2008

While we're all engaged in the drawn-out process of recovering from the Christmas food-coma I thought i'd get in one last piece before the year is out and stretch the old intellectual muscles for the first time in a while. As 2017 drifts into 2018 the British Army are fast returning to their old position as the slightly unwanted red-haired stepchild of national military strategy (and investment). Their use of the limited resources at hand also appears less than stellar. The present is an interminable struggle between keeping the fumes of the Cold War heavy army going, until a hoped-for but probably not coming deliverance in the 2030s, and beggaring themselves to deliver a rather rickety-looking medium-weight "Strike brigade" concept (which has been dissected in much more detail elsewhere).

Although some would debate this point, in my view this lack of focus is symptomatic of an army that still does not fully understand what it is and what it can realistically be. It is largely an institution still run at the highest levels by people who served most of their careers in the heady days when the UK's military was continentally postured, with a very large (by today's standards) British Army of the Rhine and a whole tactical air force positioned behind them. Whatever the merits of this approach, we can say with a high degree of certainty that those days are gone, likely for good, and that we need a new model for the army. In my view, as the title suggests, this model should be maritime. Before we go any further I need to quite clearly state what a "maritime army" is and what it is not, to avoid any unnecessary confusion.

A maritime army is one with its structure and capabilities designed around securing control of the land insofar as it enables them to secure control of, and exploit, adjacent bodies of water to its advantage at the tactical, operational and strategic levels. It is not a marine corps, inherently light or medium-weight, amphibious or focussed on landing and raiding. Nor is it an excuse to cut the army and give its resources to the other services. It does not have to move its personnel everywhere by ship all the time. It is not a new concept and reflects much of the British Army's own rich history. Even a cursory examination of where and why the army fought for the last several hundred years displays a strong proclivity towards campaigning in support of maritime objectives. One merely has to look into why the army has spent a significant portion of the last 300 years fighting its major wars in the low countries to begin to understand the relationship between the activities of the British Army and the use and control of the sea. It is no coincidence that Marlborough, Wellington, Haig, Montgomery and many others all largely fought over the same ground in Europe.


Fundamentally, the maritime army acts as an enabler for the application of all forms of sea power, from military action to logistics, and in turn sea power acts as an enabler for the maritime army. Sea power gets the army where it needs to go, supports it when it gets there and brings it home (or evacuates it) when the army needs it to. General Arthur Wellesley (better known as the Duke of Wellington) ordered the construction of three lines of deep fortifications, the so-called Lines of Torres Vedras, to deny the major port-city of Lisbon (and the Portuguese navy) to the French during the Peninsular war in the early nineteenth century. In doing so he was safeguarding the sea control which fed, supplied, inserted his army onto the Iberian peninsula. The same sea power which had also saved it from destruction in the Dunkirk-esque evacuation from Coruña. It is just one of any number of examples of sea and land power working in tandem to deliver decisive results which neither could have achieved on their own.

This short foray into history and theory brings me back around to the modern British Army. I will begin with an observation from General Sir Rupert Smith (Ret'd) which highlights the inherent brittleness of the modern British army:

"In the Gulf in 1990-91, commanding the British armoured division... I had all the up-to-date tanks in the British army, and because the engines were unreliable I was also given very nearly every tank engine in the inventory. The rest of the army had been stripped of its equipment to give me a sustainable force. I was conscious that I had the bulk of the army's modern assets in my command, that there were no production lines standing ready to replace losses, and that we had other commitments that might require them. I thought at the time, and still do, that I was the first British General for a long time who had to consider how to fight so as to not lose the army." (1)

This fundamental fact is not a black mark on the army, simply a reflection of how war has changed since the end of the Cold War. The paradigm of industrialised mass warfare which shaped the nineteenth and twentieth centuries has quite definitively come to an end for the foreseeable future. Modern Western armies more closely resemble the exquisitely-drilled professional armies of the eighteenth century than those of the World Wars. What must be borne in mind at all times when discussing how we structure, equip and plan to employ the army is that we must "consider how to fight so as to not lose the army.".

For example, throwing the Army's planned 'warfighting division' into a theoretical conflagration in Eastern Europe or the Baltic States would almost certainly result in the functional loss of the army. With such limited ability to replace the losses in trained personnel and equipment the British army would effectively cease to exist. These may sound like harsh words, but this is the world we live in. In a peer or near-peer conflict the army must be employed in a manner which allows it to deliver effects without suffering irreplaceable losses, this is made even more difficult because the threshold for what might constitute irreplaceable losses is already terribly low and there is not much we can do about it.

I may seem somewhat melodramatic when it comes to this point, and while Churchill in his usual concise manner cut to the point when he said that "wars are not won by evacuations", the ability to recover the army has on numerous occasions been the only thing which has staved off its destruction and catastrophic defeat. We need to be aware that sometimes, in spite of the best efforts of the men on the ground, things go wrong and events unfold in ways we did not foresee. In the future we may, as in the past, have need to get a large part of our army back in one piece; because the alternative is losing the army entirely. I will leave the tactical detail of the how to others with more time to delve into the depths of delivering specific capabilities, however on this subject I will say that I find Think Defence's proposal for a port-opening capability to be amongst the more authoritative assessments of a means by which we could insert or recover an army by sea. In many ways the challenge is now more complex as, unlike in 1940, we have extremely limited capacity to replace lost equipment. Pulling thousands of troops off a beach with nothing but their boots and rifles will not do, the heavy equipment needs to come too.

The next uncomfortable truth is that, for various structural and societal reasons which are unlikely to go away anytime soon, the British army is not a large army by the standards of its contemporaries. Whatever its advantages are, possession of the "big battalions" are not amongst them. We cannot afford to fight or think as if we still had the Corps-strength field army of thirty years ago. Nor do I think it's realistic to hold out hope that an army of that size is coming back anytime soon.

This begets the question, where can an army such as ours be employed to achieve the maximum effect and stand a reasonable chance of not suffering attrition so intense that it winds up being rendered functionally useless for the rest of the conflict and potentially decades afterwards. In the context of a European conflict against Russia the logical place for such a force is in Norway, where a maritime army can exploit support from the sea whilst safeguarding the airbases from which NATO maritime patrol aircraft can operate. Bodø and Andøya air stations are to the modern army what the port of Lisbon was to Wellington, a means of securing sea power from the land and reinforcing land power from the sea.

Further afield the task becomes somewhat easier, the qualitative edge Western armed forces still possess at the tactical and operational level makes small forces relatively more useful in Africa and the Middle East, as evidenced by the French experience in Mali. The continued ability to access, supply and support forces far from the homeland should remain a priority because these are precisely the areas of the world where small well-handled forces can still achieve disproportionate conventional effects. It, however, goes almost without saying that outside a major coalition (almost certainly including the United States) enduring stabilisation operations largely remain outside our ability to deliver alone without exceptional circumstances on the ground.

To conclude, almost thirty years after the end of the Cold War the British army continues to inhabit an awkward place within UK defence strategy. It is too small and brittle to risk the bulk of it on the central front of any future peer or near-peer war, doing so would almost inevitably result in the functional loss of the army for decades. Instead of hoping against hope that society, politics and economics will all change radically enough to allow us to rebuild the big battalions of the Cold War we need to look at where and how we can employ the army to achieve valuable effects without inadvertently disarming ourselves. To my mind the most effective means of achieving this is by restoring an explicit link between land and maritime operations at the level of national and alliance/coalition strategy and policymaking. In the NATO context this means prioritising the Northern flank. Beyond Europe it means continuing to leverage the conventional potency of Western armed forces to deliver disproportionate military effects through warfighting, presence and peacekeeping.

From the bunker of strategy (apparently that's a thing now?) I wish all of you the best for 2018. Now, if you'll excuse me i'm off to dig out the last of the mince pies...